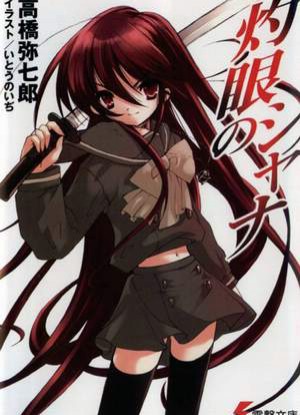 Plot Summary: Sakai Yuuji, a high school student who expected his normal life to last forever, is dead. When he was on his way home he witnessed a shocking view as the world suddenly froze: people were engulfed by blue flames and a monster resembling a large doll swallowed them. Just as the monster prepared to consume Yuuji, a sword-wielding girl in black attire with flaming red eyes and hair that burns like embers saved him from the monster. The girl called herself a “Flame Haze” who hunts the “Guze no Tomogara”, creatures from another world. As Yuuji noticed a blue flame in his chest, she called him a “Torch”, a temporary replacement, saying that the “real” Yuuji’s existence had already ended. Unfazed, Yuuji befriended the strange girl, named her “Shana”, and joined her fight against Tomogara and other Flame Hazes.