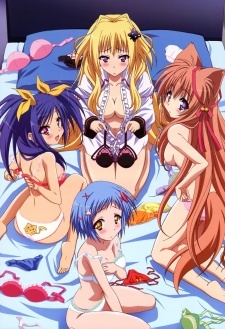 Tayutama Kiss on my Deity OVA

Plot Summary: Yuuri Mito is a typical, normal Japanese teenager. He goes to school, works on people's motorcycles and performs exorcisms. Okay, that last part's a little bit unusual, but his family lives in a shrine and they do that sort of thing. Still, you would think he'd know enough to be careful with an ancient relic he finds in the woods, especially when a mysterious goddess appears and tells him to leave it alone. Unfortunately, despite Mito's best efforts, the seal gets broken anyway and a number of dangerous "tayuti" that it held in stasis get loose. This is bad. Mito also ends up with a beautiful goddess girl who decides that she's going to marry him. This might not be so bad. if he wasn't already caught up in the middle of a war between the entities he's released. The flesh may be weak but the spirit's more than willing to compensate.

Other name: タユタマ -Pure my heart-

Tayutama Kiss on my Deity OVA